Certain food contaminants are suspected of triggering metabolic disorders, or of worsening them, particularly when they accompany a high-fat diet. In order to get a better understanding of these effects, researchers from the Inserm cardiovascular, metabolism, diabetology and nutrition unit (U1060 « Laboratoire de recherche en cardiovasculaire, métabolisme, diabétologie et nutrition » Inserm/Inra/Université Lyon 1) introduced a “cocktail” of contaminants mixed with low doses of dioxin, PCB, bisphenol A and phtalates into the feeding of mice that had already been rendered obese by a high-fat diet. The results show that metabolic changes occur in these mice, but that the effects differ depending on the gender. Females appeared to be more affected. Their obesity-induced glucose intolerance worsened and their estrogen pathway was altered.

These works have been published in the review Faseb Journal. 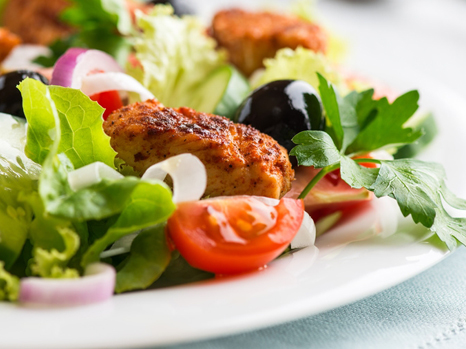 Obesity is a major public health problem because it is a risk factor in the development of metabolic complications (diabetes, cardiovascular diseases, etc.). It is a multi-factorial disorder. In addition to genetic predispositions and a life style that combines overeating with lack of exercise, there is a great volume of proof to suggest that contaminants, particularly in the food we eat, are responsible for the obesity epidemic and the resulting metabolic changes.

Researchers have put forward the hypothesis that contaminants in food could worsen certain metabolic problems already caused by eating an over-rich or a high-fat diet.

In this study, the researchers fed mice a high-fat diet (already a health risk), to which low doses of contaminants had been added. They were given this diet throughout their lives. Their mother had been nourished with this diet prior to their birth and during the gestation and lactation periods. Therefore, they suffered chronic exposure to this diet.

Two environmentally persistent contaminants[1] (dioxin and PCB) and two non-persistent contaminants[2] (phtalate and bisphenol A) were added to the high-fat (obesogenic) diet of the mice. The doses given were low, normally considered not to have any health impacts.  These products were chosen because they are present in human food and because they are known to trigger endocrine disruption. In parallel, a control group of mice was fed with the same obesogenic diet, but without added contaminants.

The researchers then ran glucose tolerance and insulin sensitivity tests. They measured the livers for lipid accumulation and the expression of certain genes that play key roles in the metabolism of the adult mice.

The results show that the effects are highly dependent on the gender of the animal.

In the females fed with a high-fat diet, the addition of contaminants worsened the glucose intolerance and altered the estrogen pathway. In males, it altered the cholesterol and lipid metabolism. There was no change in weight between the exposed mice and the unexposed mice.

The researchers pursued the hypothesis that there was a connection between the observed glucose intolerance and the alteration in the estrogen signaling in exposed females. It is well known that estrogens protect against metabolic disorders. In other words, these works suggest that in obese females, exposure to food contaminants could lower the protection level that estrogens provide against metabolic disorders.

“With this study, we have succeeded in providing proof-of-concept that low doses of contaminants, even at levels normally considered to be without health impacts in humans, do in fact affect humans when subjected to chronic exposure, and when the contaminants are combined with a high-calorie diet” points out Brigitte Le Magueresse Battistoni.

This study was carried out as part of research programmes supported by the Institut Benjamin Delessert (2010), the ANSES (EST-2010/2/2007) and the EFSD (programme 2011) and by Brigitte Le Magueresse-Battistoni and Danielle Naville, 2 researchers who work for team 1 of the CarMeN Unit run by Hubert Vidal.

[1] These products build up throughout the food chain by means of a process known as bioaccumulation, until they end up on our plates.

[2] These products break down more rapidly that the above, but the intensive production of these products, especially in the plastics industry, means that they are omnipresent in our daily lives.