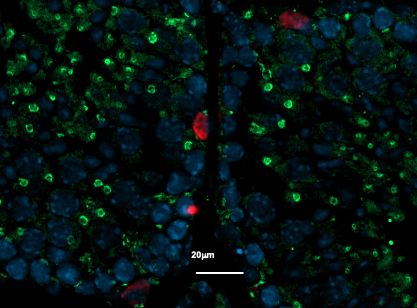 Immunostaining of a mouse testicle section, with (in red) the undifferentiated germ cells and (in green) the GFP protein reflecting TGR5 receptor expression in this study model. ©David Volle/Inserm

Infertility is a public health problem affecting millions of couples in France. Among the possible causes, chemotherapy has been singled out as having particularly harmful effects on the fertility of both women and men. In order to better prevent and restore fertility in cancer survivors, understanding the mechanisms behind these negative effects is a priority. In a new study, researchers from Inserm, CNRS and Université Clermont Auvergne investigated a receptor found on male germ cells that produce gametes, their aim being to find out more about its role in chemotherapy-related infertility. Their findings, published in Advanced Science, pave the way for a better understanding of male infertility and the development of treatments to reduce the risk of sterility from chemotherapy.

Around 3.3 million people in France are directly affected by infertility. Concerning both men and women, it has continued to increase in recent years, making it a major public health problem [1].

While there are many causes of infertility, it is currently well established that cancer treatments, including chemotherapy, can have particularly harmful effects on male and female fertility. Although cancer therapies have improved in recent years, tackling this issue is becoming a matter of urgency, as an increasing number of cancer survivors will be affected by infertility problems.

For almost 15 years, Inserm researcher David Volle and his team at the Genetics, Reproduction and Development Laboratory (Inserm/CNRS/Université Clermont Auvergne) have sought to improve their understanding of the biological mechanisms underlying infertility. Part of their research focuses on the impact of chemotherapy on male fertility, with the longer-term objective of identifying avenues to counter the adverse effects of this treatment.

In their new study, the researchers looked at TGR5 receptors, which are present on cell membranes, in order to understand their role in the harmful effects of chemotherapy.

TGR5 receptors are widely studied in the context of metabolic diseases, such as diabetes and obesity. They are activated by bile acids – molecules produced in the liver that regulate certain physiological functions, including blood glucose and energy expenditure.

However, previous research by the team had shown that these receptors are also present in germ cells, the cells that produce gametes. In mouse models mimicking liver disease, with elevated bile acid levels, the scientists had found that the TGR5 receptors on germ cells were activated – which was associated with increased sterility in animals.

To further understand the impact of TGR5 on fertility in the context of chemotherapy, the scientists in their latest study exposed mice to a chemotherapy agent called busulfan. They then showed that the chemotherapy induces the death of some of the germ cells in healthy mice, thereby affecting their fertility. “The fact that it is the germ cells, at that point undifferentiated, which are affected is particularly problematic because we are talking about the reserve of cells that produce gametes. This can reduce their renewal and contribute to post-chemotherapy infertility,” says Volle.

However, in mice that have been genetically modified to have an absence of TGR5 receptors, the effects of chemotherapy on germ cells are attenuated. This results in an accelerated return of fertility in these busulfan-treated mice compared with the control mice.

In the longer term, the objective is to develop methods to modulate TGR5 receptor activation in a targeted manner within germ cells, in order to protect them and restore fertility after chemotherapy.

The idea is also to assess whether these data can be extrapolated to other disease contexts in which TGR5 receptor activity could be modulated, such as obesity and diabetes, conditions known to impair fertility.

In addition, in parallel to this research, the team observed that even when fertility was maintained in mice exposed to chemotherapy, the quality of the gametes was affected. The scientists will therefore now endeavor to understand both the quantitative and qualitative impacts on germ cells in order to limit not just fertility disorders but also the longer-term consequences on the offspring of animals.

[1] A report requested by the French Minister of Health and the Secretary of State for Childhood and Family in February 2022 outlines a national strategy to combat infertility: https://solidarites- sante.gouv.fr/IMG/pdf/rapport_sur_les_causes_d_infertilite.pdf

Identification of a crosstalk between TGR5, GLIS2 and TP53 signaling pathways in the control of undifferentiated germ cell homeostasis and chemoresistance