Molecule discovered that protects the brain from cannabis intoxication

Two INSERM research teams led by Pier Vincenzo Piazza and Giovanni Marsicano (INSERM Unit 862 “Neurocentre Magendie” in Bordeaux) recently discovered that pregnenolone, a molecule produced by the brain, acts as a natural defence mechanism against the harmful effects of cannabis in animals. Pregnenolone prevents THC, the main active principle in cannabis, from fully activating its brain receptor, the CB1 receptor, that when overstimulated by THC causes the intoxicating effects of cannabis. By identifying this mechanism, the INSERM teams are already developing new approaches for the treatment of cannabis addiction.

These results are to be published in Science on 3 January.

Over 20 million people around the world are addicted to cannabis, including a little more than a half million people in France. In the last few years, cannabis addiction has become one of the main reasons for seeking treatment in addiction clinics. Cannabis consumption is particularly high (30%) in individuals between 16 to 24 years old, a population that is especially susceptible to the harmful effects of the drug.
While cannabis consumers are seeking a state of relaxation, well-being and altered perception, there are many dangers associated to a regular consumption of cannabis. Two major behavioural problems are associated with regular cannabis use in humans: cognitive deficits and a general loss of motivation. Thus, in addition to being extremely dependent on the drug, regular users of cannabis show signs of memory loss and a lack of motivation that make quite hard their social insertion.The main active ingredient in cannabis, THC, acts on the brain through CB1 cannabinoid receptors located in the neurons. THC binds to these receptors diverting them from their physiological roles, such as regulating food intake, metabolism, cognitive processes and pleasure. When THC overstimulates CB1 receptors, it triggers a reduction in memory abilities, motivation and gradually leads to dependence. 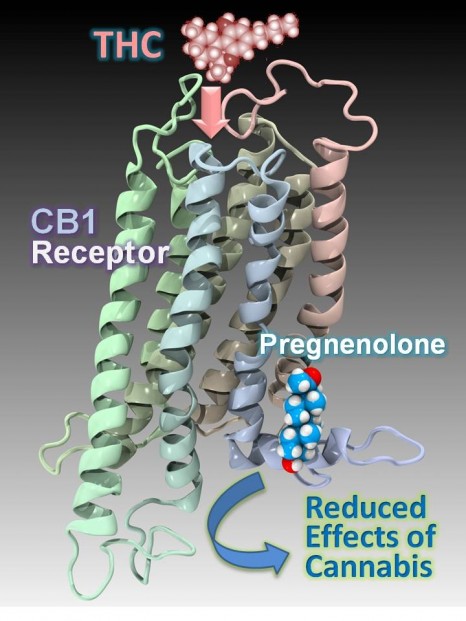 Developing an efficient treatment for cannabis addiction is becoming a priority of research in the fiend of drug addiction.

In this context, the INSERM teams led by Pier Vincenzo Piazza and Giovanni Marsicano have investigated the potential role of pregnenolone a brain produced steroid hormone. Up to now, pregnenolone was considered the inactive precursor used to synthesize all the other steroid hormones (progesterone, estrogens, testosterone, etc.).

The INSERM researchers have now discovered that pregnenolone has quite an important functional role: it provide a natural defence mechanism that can protect the brain from the harmful effects of cannabis.

Essentially, when high doses of THC (well above those inhaled by regular users) activate the CB1 cannabinoid receptor they also trigger the synthesis of pregnenolone. Pregnenole then binds to a specific site on the same CB1 receptors (see figure) and reducing the effects of THC.
The administration of pregnenolone at doses that increase the brain’s level of this hormone even more, antagonize the behavioral effects of cannabis.
At the neurobiological level, pregnenolone greatly reduces the release of dopamine triggered by THC. This is an important effect, since the addictive effects of drugs involve an excessive release of dopamine.
This negative feedback mediated by pregnenolone (THC is what triggers the production of pregnenolone, which then inhibits the effects of THC) reveal a previously unknown endogenous mechanism that protects the brain from an over-activation of CB1 receptor.

A protective mechanism that opens the doors to a new therapeutic approach.

The role of pregnenolone was discovered when, rats were given equivalent doses of cocaine, morphine, nicotine, alcohol and cannabis and the levels of several brain steroids (pregnenolone, testosterone, allopregnenolone, DHEA etc..) were measured. It was then found that only one drug, THC, increased brain steroids and more specifically selectively one steroid, pregnenolone, that went up3000% for a period of two hours. 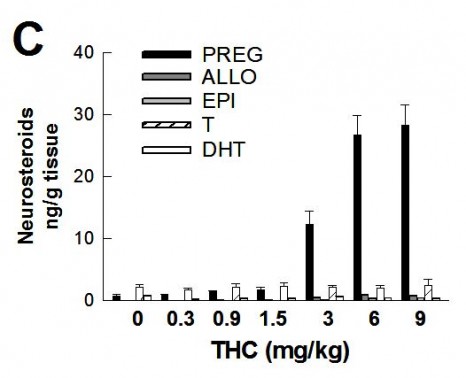 This increase in pregnenolone is a built-in mechanism that moderates the effects of THC. Thus, the effects of THC increase when pregnenolone synthesis is blocked. Conversely, when pregnenolone is administered to rats or mice at doses (2-6 mg/kg) that induce even greater concentrations of the hormone in the brain, the negative behavioural effects of THC are blocked. For example, the animals that were given pregnenolone recover their normal memory abilities, are less sedated and less incline to self-administer cannabinoids.
Experiments conducted in cell cultures that express the human CB1 receptor confirm that pregnenolone can also counteract the molecular action of THC in humans.
Pier Vincenzo Piazza explains that pregnenolone itself cannot be used as a treatment “Pregnenolone cannot be used as a treatment because it is badly absorbed when administerd orally and once in the blood stream it is rapidly transformed in other steroids”.
However, the researcher says that there is strong hope of seeing a new addiction therapy emerge from this discovery. “We have now developed derivatives of pregnenolone that are well absorbed and stable. They then present the characteristics of compounds that can be used as new class of therapeutic drugs. We should be able to begin clinical trials soon and verify whether we have indeed discovered the first pharmacological treatment for cannabis dependence.”
This work was made possible with support from: MILDT, Conseil Régional d’Aquitaine, ERC and INSERM.