Despite their efforts, many morbidly obese people continue to consume too much food (hyperphagia) compared to their reserves and their needs. And yet, the hunger hormone, called ghrelin, is most frequently found at a normal or even lower level in these patients. The Inserm Unit 1073 team “Nutrition, inflammation and dysfunction of the gut-brain axis” (Inserm/University of Rouen) has just explained this mechanism causing this paradoxical hyperphagia. Certain antibodies have a greater affinity for ghrelin in obese patients, leading to extended appetite stimulation.

These results are published in the journal Nature Communications, on 25 October 2013.

Obesity affects more than 15% of adults in France, and its constitutive mechanisms are still not completely explained. Normally, fine control of weight and food intake is coordinated by a specialised part of the brain (the hypothalamus). It adjusts food intake depending on reserves and needs. In this way, after a period of excessive food intake and weight gain, a healthy subject will tend spontaneously to reduce their food intake for a while to return to their previous weight.

In many of the morbidly obese, this mechanism is faulty: despite their efforts, they continue to consume too much food (hyperphagia), contributing to maintaining a higher weight or even increasing it further. Even so, their brain should take in the information about over-eating and reduce food intake to encourage weight loss. This observation is all the more surprising given that the hunger hormone ghrelin, produced by the stomach and acting on the hypothalamus, is most frequently found at a normal, or even a reduced level in obese patients.

The study conducted by Sergueï Fetissov and the team from joint research unit 1073 “Nutrition, inflammation and dysfunction of the gut-brain axis” (Inserm/University of Rouen), directed by Pierre Déchelotte, collaborating with Prof Akio Inui’s team at the University of Kagoshima (Japan), reveals the molecular mechanism of this paradoxical hyperphagia.

The researchers have highlighted the presence of specific antibodies, or immunoglobulins, in the blood of obese patients, antibodies that recognise ghrelin and regulate appetite.

By binding to ghrelin, the immunoglobulins protect the hunger hormone from being broken down rapidly in the bloodstream. The ghrelin can then act on the brain for longer and stimulate appetite. 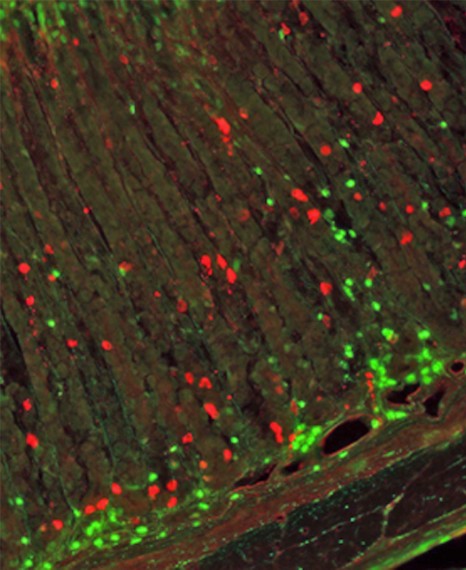 “The immunoglobulins have different properties in obese patients“, explains Sergueï Fetissov, researcher in the Inserm unit in Rouen and main author of the study. “They are more strongly ‘attracted’ to ghrelin than in subjects of normal weight or in anorexic patients. It is this difference in ‘affinity’ that enables the immunoglobulins to transport more ghrelin to the brain and boost its stimulating action on food intake“, he continues.

“Our discover open a new opportunity to design treatments acting on the basis of this mechanism to reduce hyperphagia observed in cases of obesity“, emphasises Pierre Déchelotte, Director of the joint Inserm/University of Rouen unit.

This study extends other work by the research team, published in 2011, on the role of immunoglobulins interfering with different hormones acting on appetite, satiety or anxiety in cases of anorexia, bulimia or depression, and on the probable involvement of intestinal flora (microbiotic) in these interactions.

“Our results could also be used to study the opposite phenomenon, loss of appetite, such as observed in cases of anorexia“, concludes Pierre Déchelotte.