We’re all a bit Neanderthal… or are we? 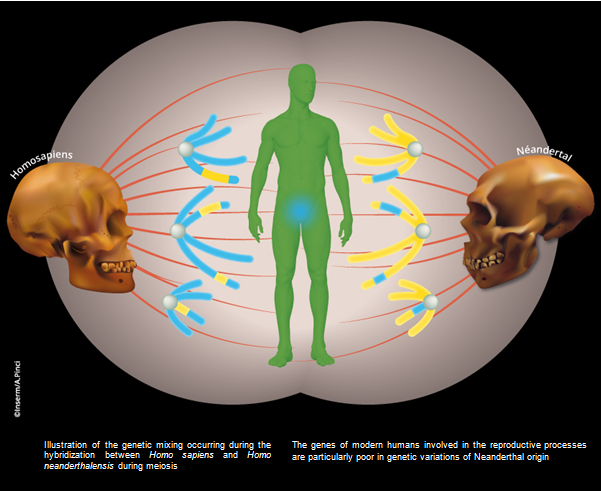 A study conducted by Inserm researchers at the Research Institute for Environmental and Occupational Health (Irset)[1] has shown that natural selection has “purged” our bodies of many of the traces of our ancient Neanderthal and Denisovan cousins in the genes responsible for the genetic mixing essential to reproduction. The researchers have shown that the genes expressed during meiosis in the cells that produce gametes (reproductive cells) are strongly deficient in genetic variations of Neanderthal origin that were the result of the interbreeding between Homo sapiens and Homo neanderthalensis. These results have been published in Molecular Biology and Evolution.

For decades, a question has preoccupied paleontologists regarding our now-extinct cousins, the Neanderthals and Denisovans:  what was the nature of the interactions between modern humans (Homo sapiens) and the other species of the Homo genus ?

Well, hundreds of thousands of years ago, a succession of human migrations from Africa to the other continents led to the coexistence in Eurasia of Homo sapiens with various other now-extinct species of the Homo genus. In 2014, the sequencing of a Neanderthal genome was made possible by the discovery of bone fragments containing DNA. With the very recent emergence of paleogenomics, it has been established that 1 to 3% of the genome of present-day Eurasians is inherited from the Neanderthals, whereas 3 to 6% of that of Oceanians is inherited from other ancestral cousins, the Denisovans. The women and men that populate our planet today are the result of many interbreeding events that have enabled human populations to expand thanks to the acquisition of characteristics favorable to climatic and environmental adaptations.

However, a surprising particularity recently came to light: the genetic variations inherited from interbreeding with these extinct species are not evenly distributed on the chromosomes. As such, Prof.  David Reich’s team demonstrated that these “archaic” genetic variations are present only to a very minor extent on the genes expressed specifically in the testis of modern humans.

Hence the key question studied by the researchers in Rennes: within the testis and ovary, to which specific functions are these genes, deficient in Neanderthal and Denisovan genetic variations, assigned ?

The results obtained show that it is only those genes expressed specifically during meiosis, the process responsible for genetic mixing, that are highly deficient in ancestral alleles of Neanderthal and Denisovan origin. The conclusions were the same when the germ cells present in human fetal ovaries were studied. Since meiosis is a unique and fundamental process of spermatogenesis and oogenesis, natural selection has therefore “purged” our gene pool of the genetic variations that could have adversely affected its progression and thus prove harmful to the continuation of our species.

For the study’s coordinators Frédéric Chalmel and Bernard Jégou, this shows that “while interbreeding between modern humans and these extinct hominins has enabled us to acquire new adaptive traits important for our survival, it probably had a negative impact on the fertility of the initial hybrids. That is certainly why the genes involved in meiosis, a particularly sensitive biological process, have been purged of genetically archaic variations.  This is the first paleo-fertility study and it is likely to reveal evolutionary processes involved in certain present-day cases of infertility.”

TO CITE THIS POST :
Press release – Inserm press room We’re all a bit Neanderthal… or are we? Link : https://presse.inserm.fr/en/francais-on-a-tous-en-nous-quelque-chose-de-neandertal-sauf/28638/