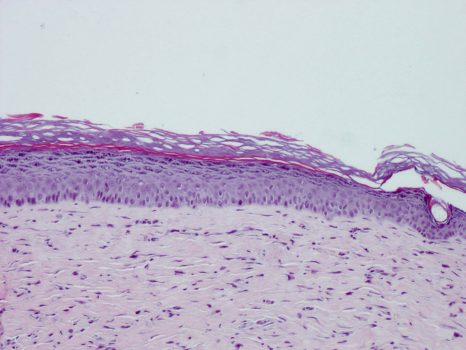 A CEA, INSERM and the University of Paris team, produced in collaboration with I-Stem, the AFM-Téléthon laboratory, and the University of Évry has just published a paper in which it demonstrates the central role of the transcription factor KLF4 in regulating the proliferation of epidermal stem cells and their ability to regenerate this tissue. This study opens perspectives for regenerative skin medicine. It was published on 21 October in Nature Biomedical Engineering.

Human skin completely renews itself every month thanks to the presence of stem cells in the deepest layer, which generate all the upper layers of this tissue. The deciphering of genes that regulate stemness remains an enigma that is only partially resolved, in particular for human skin.

The discoveries of a French research team from the CEA, INSERM and the University of Paris, produced in collaboration with I-Stem, the AFM-Téléthon laboratory, and the University of Évry, opens perspectives for regenerative cutaneous medicine, in particular for the bio-engineering of skin grafts for tissue reconstruction. Massive ex vivo expansion of epidermal cells (called keratinocytes) is needed for the production of grafts. It is performed using a skin sample from the patient that contains adult keratinocytes and a minority population of keratinocyte stem cells. This expansion phase involves a risk: it may be accompanied by a quantitative loss or degradation of stem cells, leading to a loss of regenerative potential.

The results of the paper published in Nature Biomedical Engineering show that reducing the expression of the KLF4 gene during graft preparation promotes rapid expansion of functional stem cells1, without damaging their genomic stability. Keratinocytes expanded under these conditions have an increased long-term regenerative potential in in vitro epidermal reconstruction models and in vivo grafts2. KLF4 is therefore a new molecular target for preserving the functionality of stem cells and making progress in the bio-engineering of skin grafts. These results constitute a proof of concept, which requires additional developments to envisage clinical applications, including the treatment of severe burns and chronic ulcers, and breast reconstruction.

This work has been extended to other types of cells of interest for cutaneous cell therapy. In the future, keratinocytes produced from pluripotent stem cells could be an alternative to adult stem cells in certain reconstructed tissue bio-engineering applications.

One of the difficulties encountered in this area is that fact that the keratinocytes obtained do not have all the functions of adult stem cells. In particular, they are deficient in terms of their proliferation potential. The study has shown that manipulation of KLF4 expression is also suitable for these cells, as reducing its expression in keratinocytes derived from embryonic stem cells (ESC) improves their proliferation capacity and their ability to reconstruct skin.

1.A single functional stem cell is able to regenerate the skin throughout a person’s life. This is due to its very long-term proliferation capacity, its immature nature and its capacity for three-dimensional organisation.

Long COVID: When Symptoms Persist Months after the First Wave