Primary bone cancer develops when the cells which are continually forming our bones get out of control. If cancer takes hold, these cells can degenerate and form bone haphazardly without any specific organisation. Researchers in Inserm Unit 957 “Bone Resorption Physiopathology and Primary Bone Tumour Therapy” in Nantes have recently developed an innovative treatment which stops the vicious circle that allows bone cancer to progress.

Published in today’s issue of Nature Communications, their study shows an inhibition of tumour progression and a reduction in bone degradation combined with extended lifespan in animals.

Survival rates for primary bone cancer, which mainly affects children and teenagers and whose incidence peaks around the age of 15, are 50 to 70% in the best cases for localised forms and 20 to 30% in the event of metastasis, relapse or treatment resistance. This prognosis has not changed over the last 30 years. Although these forms of cancer, which include osteosarcoma, Ewing’s sarcoma and chrondrosarcoma, are caused by a diverse range of factors of which little is yet known, they seem to involve similar types of cell dysfunction. However, there have been no major advances in the treatment of these types of cancer for about fifteen years.

Thanks to work carried out by the Inserm research team, it has been clearly established that an imbalance between the action of osteoblasts and osteoclasts is involved in the development of primary bone tumours. Indeed, when a tumour cell grows on a bone site, major resorption occurs causing bones to weaken (with lesions, fractures etc.).

Primary bone tumours ‘use’ the bones’ microenvironment in order to spread. Tumour cells disrupt the system’s natural balance by releasing proteins known as ‘growth factors’. These molecules are capable of activating osteoclasts/osteoblasts, not only causing major bone degradation but also releasing other growth factors normally trapped inside the bone. Once released these stimulate tumour growth. The larger the quantities of growth factors present in the tumour’s microenvironment, the more the tumour spreads. This is what we refer to as the ‘vicious circle’.

No treatment is yet capable of inhibiting these three components of the vicious circle, namely the tumour, osteoblasts and osteoclasts.

The researchers decided to focus on the fact that cells can turn tumorous if the expression of certain genes known as ‘tumour facilitators’ gets out of control. A number of proteins are involved in controlling the expression of these genes, in particular the BRD protein family. The researchers have proven for the first time that an innovative treatment targeting these transcription-controlling BRD proteins inhibits the three components of the vicious circle, namely the tumour cells and the differentiation of osteoclasts and osteoblasts. By chemically inhibiting the BRD4 protein (which belongs to the BRD family), researchers limited the spread of primary bone tumours while maintaining bone architecture.

Further tests were performed on patient biopsies to illustrate and confirm the results achieved with animals. 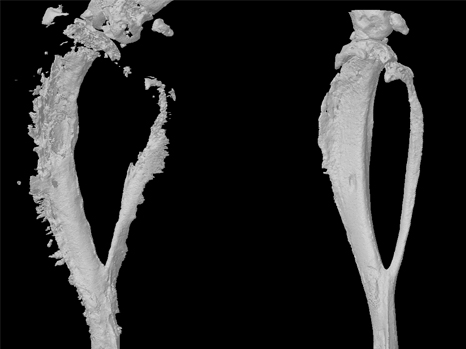 “Our study clearly demonstrates inhibition of tumour progression and bone degradation combined with extended lifespan in animals”, comments Inserm researcher François Lamoureux. At 32 days, all the mice in the control group had died while the treated mice were still alive after 40 days. “On the basis of work, we can now seriously consider the possibility of developing a new treatment for primary bone tumour patients which tackles both the tumour and the associated bone degradation.” Moreover, since bone architecture is preserved, we could envisage a wider range of indications including bone metastases in patients with prostate or breast cancer and also non-tumorous bone diseases (e.g. osteoporosis)”.

Diagram: treatment tackles the 3 components of the vicious circle