The Extraordinary Powers of Bacteria Visualized in Real Time 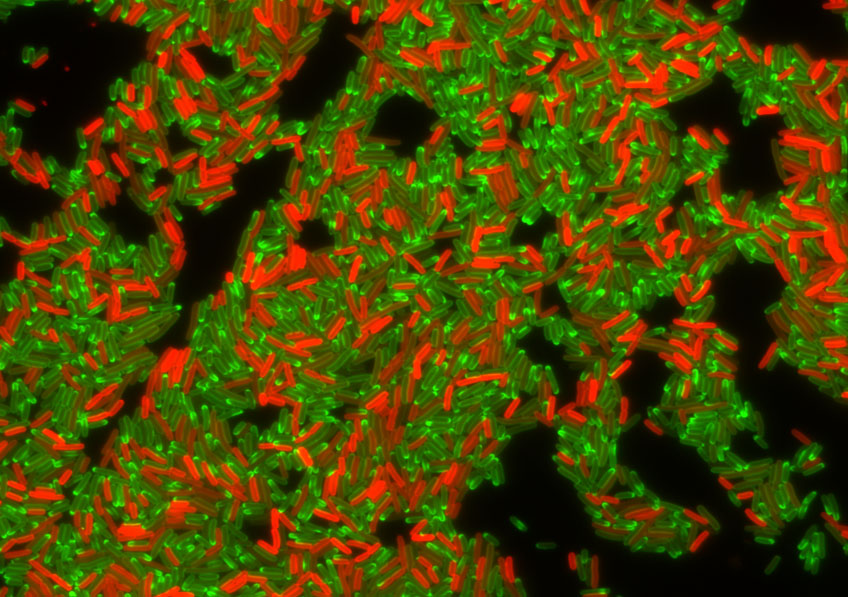 The global spread of antibiotic resistance is a major public health issue and a priority for international microbiology research. In his paper to be published in the journal Science, Christian Lesterlin, Inserm researcher at Lyon’s “Molecular Microbiology and Structural Biochemistry” laboratory (CNRS/Université Claude Bernard Lyon 1), and his team were able to film the process of antibiotic resistance acquisition in real time, discovering a key but unexpected player in its maintenance and spread within bacterial populations.

The researchers chose to study the acquisition of Escherichia coli resistance to tetracycline, a commonly used antibiotic, by placing a bacterium that is sensitive to tetracycline in the presence of one that is resistant. Previous studies have shown that such resistance involves the ability of the bacterium to expel the antibiotic before it can exert its destructive effect using “efflux pumps” found on its membrane. These specific efflux pumps are able to eject the antimicrobial molecules from the bacteria, thereby conferring on them a certain level of resistance.

In this experiment, the transmission of the DNA from one specific “efflux pump” – the TetA pump – was observed between a resistant bacterium and a sensitive bacterium using fluorescent marking.  Thanks to live-cell microscopy, the researchers just had to track the progression of the fluorescence to see how the DNA of the “pump” migrated from one bacterium to another and how it was expressed in the recipient bacterium.

The researchers revealed that in just 1 to 2 hours, the single-stranded DNA fragment of the efflux pump was transformed into double-stranded DNA and then translated into functional protein, thereby conferring the tetracycline resistance on the recipient bacterium.

How is resistance organized in the presence of an antibiotic?

Tetracycline’s mode of action is well-known to scientists: it kills bacteria by binding to their translational machinery, thereby blocking any possibility of producing proteins. Following this line of reasoning, it would be expected that by adding the antibiotic to the previous culture medium, the TetA efflux pump would not be produced and the bacteria would die. However, the researchers observed that, paradoxically, the bacteria were able to survive and efficiently develop resistance, suggesting the implication of another factor essential to the process of acquiring resistance.

The scientists discovered that this phenomenon can be explained by the existence of another efflux pump that is present in virtually all bacteria: AcrAB-TolC. While this generalist pump is less efficient than TetA, it is still able to expel a small amount of antibiotic from the cell, meaning that the bacteria can maintain minimal protein synthesis activity. Therefore, if the bacterium is lucky enough to have received a resistance gene through conjugation, then the TetA pump is produced and the bacteria becomes durably resistant.

This study opens up new avenues in the search for similar mechanisms in bacteria other than E. coli, and for different antibiotics. “We could even consider a therapy combining an antibiotic and a molecule able to inhibit this generalist pump. While it is still too soon to envisage the therapeutic application of such an inhibitor, numerous studies are currently being performed in this area given the possibility of reducing antibiotic resistance and preventing its spread to the various bacterial species” concludes Lesterlin.