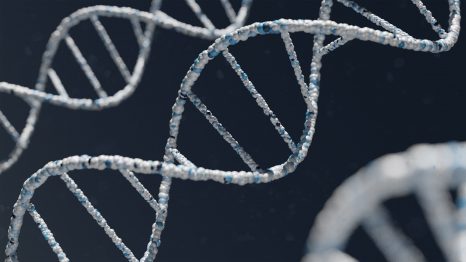 Steinert’s disease is caused by the abnormal repetitions of a small DNA sequence in the DMPK gene. ©Unsplash

Myotonic dystrophy type 1 (DM1) or Steinert’s disease is a rare and debilitating genetic neuromuscular disease affecting multiple organs and with a fatal outcome. No treatment is available at present. Encouraged by previous research into its molecular causes, researchers from Inserm, CNRS, Sorbonne Université, Lille University Hospital and Université de Lille, in partnership with the Institute of Myology, at the Center for Research in Myology and the Lille Neuroscience & Cognition center, have developed and tested a promising gene therapy that acts directly at the origin of the disease. Initial findings published in Nature Biomedical Engineering show correction of molecular and physiological alterations in mouse skeletal muscle1.

Myotonic dystrophy type 1 (DM1), otherwise known as Steinert’s disease, is a rare, hereditary and genetic neuromuscular condition affecting around 1 in 8,000 people. Debilitating and fatal, it is referred to as a “multisystem” condition because it simultaneously affects the muscles (muscle weakening and atrophy called “dystrophy”; muscle relaxation impairment called “myotonia”) and other organs (cardiorespiratory, digestive and nervous systems, etc.). The expression and course of the disease vary from one patient to the next and no treatment exists as yet.

It is caused by the abnormal repetition of a small DNA sequence (triplet CTG2) in the DMPK (DM1 Protein Kinase) gene located on chromosome 19. In healthy individuals, this sequence is present but repeated between 5 and 37 times. However, in patients with DM1, a mutation occurs whereby the number of triplets increases, producing up to several thousand repetitions.

About the mechanisms enabling gene expression

To obtain the production of a protein, a gene (located in the cell nucleus) is first transcribed into a molecule of RNA. To become a messenger RNA (mRNA), it undergoes maturation, particularly involving splicing. This basically means that the molecule is cut into pieces, some of which are eliminated and others attached. Thanks to this finely regulated process, one gene can lead to the synthesis of different mRNA and therefore of different proteins. After splicing, the mature mRNA will eventually be translated into protein, outside of the cell nucleus.

In Steinert’s disease, the mutated gene is transcribed but the mutant mRNA are retained in the cell nuclei as characteristic aggregates. In the cells of people with DM1, the MBNL1 proteins that normally bind to certain RNA in order to regulate their splicing and maturation are “captured” by the RNA that carry the mutation.

Thus sequestered in the aggregates, it is impossible for them to perform their functions, resulting in the production of proteins that function less well or not at all, some of which have been linked to clinical symptoms.

The team led by CNRS Research Director Denis Furling at the Myology Research Center (Inserm/Sorbonne Université/Institute of Myology) in association with that of Nicolas Sergeant, Inserm Research Director at the Lille Neuroscience & Cognition Centre (Inserm/Université de Lille/Lille University Hospital), focused on a therapeutic strategy to restore the initial activity of MBNL1 in skeletal muscle cells expressing the mutation responsible for Steinert’s disease.

To do this, the scientists engineered modified proteins that present, like the protein MBNL1, binding affinities for the RNA carrying the mutation and as a consequence act as a decoy for these RNA.

When expressing these decoy proteins in vitro in muscle cells from patients with DM1, they observed that they were captured by the mutated RNA instead of the MBNL1 proteins. The latter were then released from the aggregates of mutated RNA and regained their normal function. As a result, the splicing errors initially present in these cells disappeared. Finally, the mutated RNA bound to the decoy proteins proved to be less stable and could be more easily and effectively eliminated by the cell. 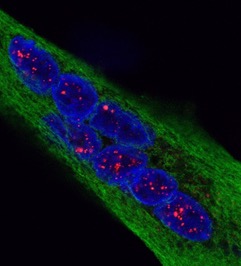 The research team then transposed this technique into an animal model in order to verify the validity of this approach in vivo. With the help of viral vectors used in gene therapy, the decoy proteins were expressed in the skeletal muscle of mouse models of Steinert’s disease. In these mice, a single injection was effective, over a long period of time and with few side effects, in correcting the muscle damage associated with the disease, particularly the splicing errors, myopathy and myotonia.

“Our findings highlight the efficacy on Steinert’s disease symptoms of a gene therapy based on the bioengineering of RNA-binding decoy proteins with strong affinity for the pathological repetitions present in the mutated RNA, in order to release the MBNL1 proteins and restore their regulatory functions,” declares Furling. However, the authors point out that additional studies are needed before this therapy can be transposed into a clinical study. “This research paves the way for the development of therapeutic solutions in the context of other diseases in which pathological RNA repetitions cause splicing regulation dysfunction,” concludes Sergeant.

1 The striated skeletal muscle is the muscle that is attached to the skeleton by tendons and which, due to its ability to contract, enables the performance of precise movements in a well-defined direction.

2 The coding sequence of a gene consists of the chaining of different combinations of four nucleic acids: adenine, guanine, cytosine, and thymine (replaced by uracil in RNA). These are organized in triplets (or codons) whose correct “reading” by the cell machinery enables the expression of a protein.