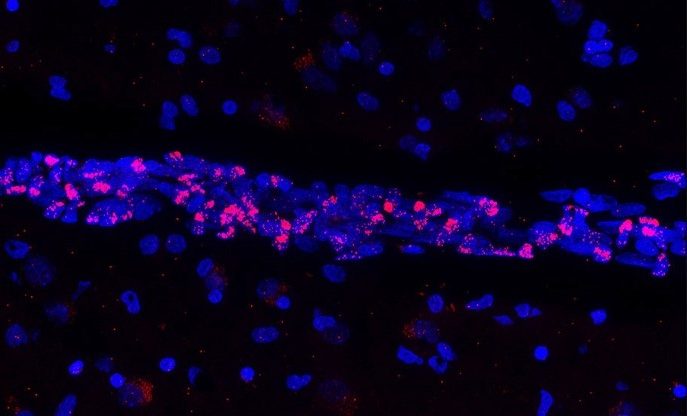 A large number of researchers are currently mobilized to increase knowledge of SARS-CoV-2 in order to improve the treatment of infected patients and try to predict the future health impacts of infection with the virus. As part of an international collaboration, researchers from Inserm, Université de Lille, Lille University Hospital, and Pasteur Institute Lille within the Lille Neuroscience & Cognition laboratory, along with their colleagues from the CNRS1, have been the first to identify a direct effect of SARS-CoV-2 on the brain’s blood vessels. Certain cells, namely the cerebral vascular endothelial cells – essential components of the blood-brain barrier that protects the brain – are affected by a phenomenon of cell death. These findings, published in the journal Nature Neuroscience, particularly question the long-term impacts of the disease.

The blood vessels are comprised of endothelial cells. These include the vascular endothelial cells in the brain that make up the blood-brain barrier (BBB). The primary function of the BBB is to isolate the central nervous system from the bloodstream, preventing foreign substances or potentially toxic molecules from entering the brain and spinal cord while allowing the transfer of nutrients essential to their activity. As part of this effort, the vascular endothelial cells in the brain therefore play a key role in the proper irrigation of the organ, with their survival being essential for it to function correctly.

Within the framework of an international collaboration funded by the European Research Council3, the authors of the study looked at the vascular endothelial cells of the brain and the consequences of SARS-CoV-2 infection on their functioning.

Using preclinical research models and also by studying the cortex of patients who died as a result of SARS-CoV-2 infection, the researchers have shown that infection leads to the death of endothelial cells in the brain, resulting in the appearance of “ghost vessels” in the brain (empty tubes with no endothelial cells).

As a result, these essential cells can no longer perform their function in the BBB.

How does this endothelial cell death occur? What are the mechanisms involved? Thanks to state-of-the-art techniques2, the team has discovered that SARS-CoV-2 generates the manufacturing, from its own genetic material, of molecular scissors by the endothelial cells it infects. These scissors cleave a protein called NEMO which, being necessary for the endothelial cells to survive, therefore leads to their death.

The impacts of endothelial cell death on brain function

According to the scientists, the death of vascular endothelial cells in the brain can have two major consequences:

However, the study shows that the situation is reversible.

Furthermore, the scientists are interested in the long-term impacts of this phase of vulnerability during which brain irrigation is decreased. According to them, even if this hypothesis remains to be verified, this window of time could predispose certain people with the disease to develop cognitive or neurodegenerative disorders, or even dementia.

“This awareness of the severity of SARS-CoV-2 infection and its impacts on proper brain function is vital to enable the best possible management of infected patients in the years to come,” concludes Vincent Prévot, Inserm Research Director.