The surprising ability of blood stem cells to respond to emergencies

A research team of Inserm, CNRS and MDC lead by Michael Sieweke of the Centre d’Immunologie de Marseille Luminy (CNRS, INSERM, Aix Marseille Université) and Max Delbrück Centre for Molecular Medicine, Berlin-Buch, today revealed an unexpected role for hematopoietic stem cells: they do not merely ensure the continuous renewal of our blood cells; in emergencies they are capable of producing white blood cells “on demand” that help the body deal with inflammation or infection. This property could be used to protect against infections in patients undergoing bone marrow transplants, while their immune system reconstitutes itself. The details of the research is published in Nature on april 10th 2013. 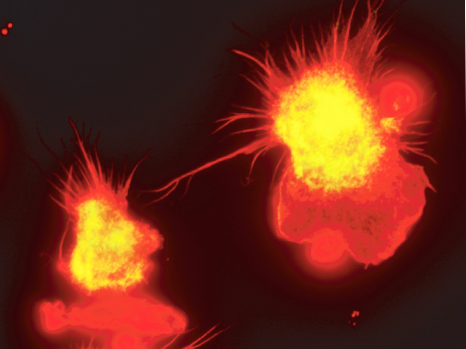 Cells in our blood feed, clean and defend our tissues, but their lifespan is limited. The life expectancy of a red blood cell rarely exceeds three months, our platelets die after ten days and the vast majority of our white blood cells survive only a few days.

The body must produce replacement cells in a timely manner. This is the role of hematopoietic stem cells, more commonly called blood stem cells. Nestled in the core of the bone marrow (the soft tissue in the center of long bones such as the chest, spine, pelvis and shoulder), they dump billions of new cells into the bloodstream every day. To accomplish this strategic mission, they must not only multiply but also differentiate, i.e. to produce specialized white blood cells, red blood cells or platelets.

For many years, researchers have been interested in how this process of specialization is triggered in stem cells. Michael Sieweke and his team previously discovered that the latter do not engage randomly in a particular differentiation pathway but “decide” their fate under the influence of internal factors and signals from the environment.

An important issue remains: how do stem cells manage to respond appropriately to emergencies? For example, are they able to meet the demand by producing white blood cells like macrophages to eat microbes during infection?

Until now, the answer was clear: the stem cells could not decode such messages and were content to differentiate randomly. Michael Sieweke’s team has demonstrated that, far from being insensitive to these signals, stem cell perceive them and in return manufacture the cells that are most appropriate for the danger that is faced.

“We have discovered that a biological molecule produced in large quantities by the body during infection or inflammation directly shows stem cells the path to take,” said Dr. Sandrine Sarrazin, Inserm researcher, co-author of the publication. “As a result of this molecule, called M-CSF (Macrophage Colony-Stimulating Factor), the switch of the myeloid lineage (the PU.1 gene) is activated and the stem cells quickly produce the cells that are best suited to the situation such as macrophages.”

Now that we have identified this signal, it may be possible in the future to accelerate the production of these cells in patients facing the risk of acute infection,” said Dr. Michael Sieweke, CNRS Research Director. “This is the case for 50,000 patients worldwide each year* who are totally defenseless against infections just after bone marrow transplantation. Thanks to M-CSF, it may be possible to stimulate the production of useful cells while avoiding to produce those that can inadvertently attack the body of these patients. They could therefore protect against infections while their immune system is being reconstituted”.

This seemingly simple discovery is quite original, both in its approach and by the technology it required. To reach their conclusions the team had to measure the change of state in each cell. This was a double challenge: the stem cells are not only very rare (there is only one stem cell per 10,000 cells in the bone marrow of a mouse), but they are also completely indistinguishable from their descendants.

“To differentiate the protagonists we used a fluorescent marker to indicate the status (on or off) of the myeloid cell switch: the protein PU.1. First in the animal, then by filming the accelerated cell differenciation under a microscope, we showed that stem cells “light-up” almost immediately in response to M-CSF,” said Noushine Mossadegh-Keller, CNRS assistant engineer, co-author of this publication. “To be absolutely sure, we recovered the cells one by one and confirmed that the myeloid genes were activated in all the cells that had turned green: once they perceived the warning message, they changed identity.”